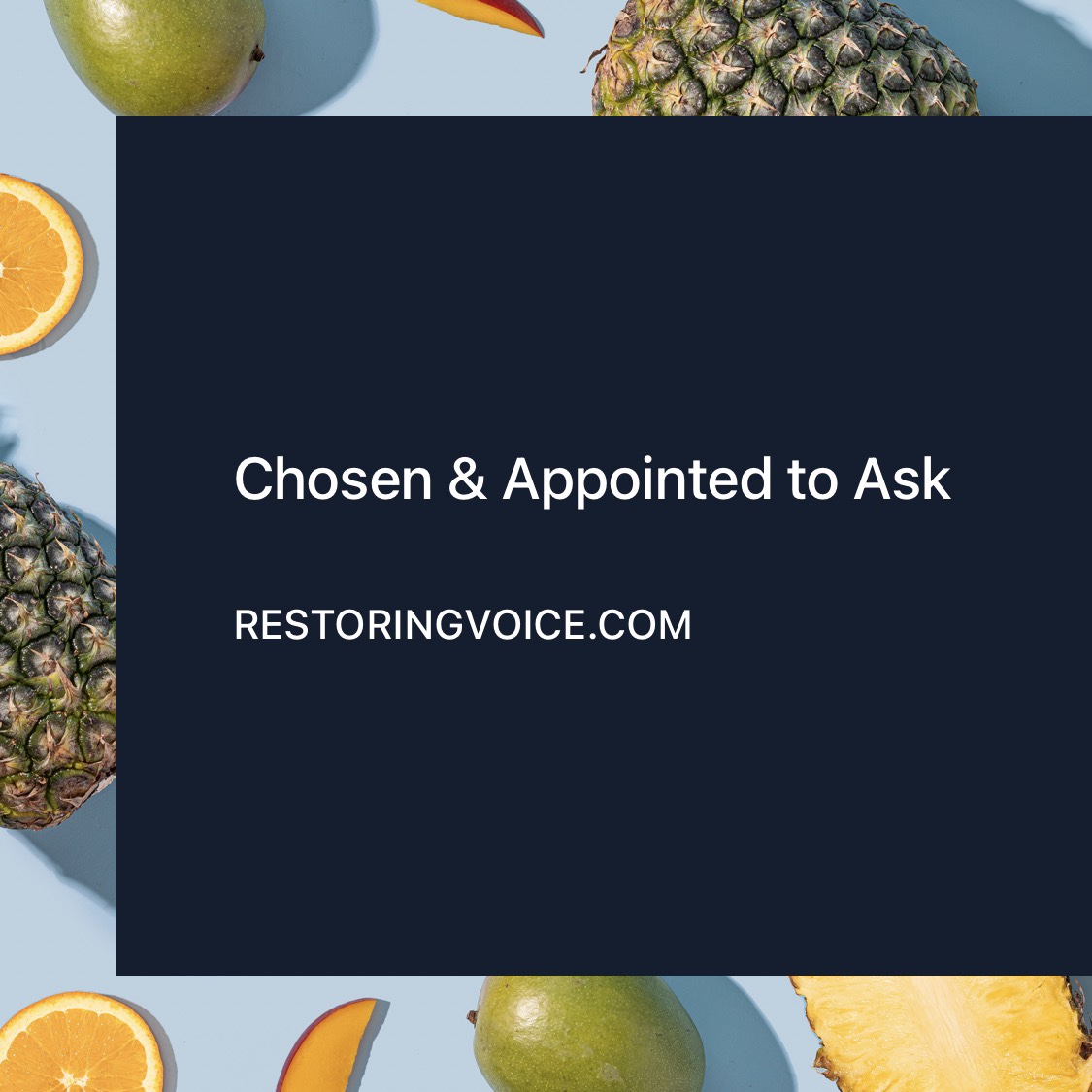 “You did not choose Me but I chose you, and appointed you that you would go and bear fruit, and that your fruit would remain, so that whatever you ask of the Father in My name He may give to you.” ‭‭John‬ ‭15:16‬ ‭‬‬

Chosen. God chose me. He chose you. He chooses each of us, right where we are, right as we are. He doesn’t look for qualifiers, like when we were in grade school and needed to pick teams for an activity. You wanted the fastest runner, the best shot, those that were athletically inclined if it was physical. Or you wanted the honor roll student for a project partner where grades were going to be given. He picked the disciples right where they were. Many prophets were anointed doing things other than sitting in the temple.

He doesn’t look for disqualifies either. When someone is hiring for a job, they may look at experience or skills for what an applicant doesn’t have to narrow down applicants. With algorithms many qualified candidates may not even make it to the hiring person because they didn’t use the right words in their application or resume. God doesn’t rule people out based on the past or even present circumstances. He picked a prostitute to save the Israel spies, an outsider and widow to birth the lineage of Christ, and a murderer to write 2/3 of the New Testament.

Appointed. He appointed us. He has assigned a role or job for each of us. A unique plan that no one else is meant to fulfill. It is easy to think “ someone else can do it.” But only one person can be appointed to a position at a time. There can be more than one position, but only one appointment to each. I admit I’ve passed on my fair share of assignments. I’ve also picked up appointments that I know were not mine. When people don’t do what they are appointed for, someone else has to step up, which means they also have to step out of what they are assigned to for that time.

Go and Bear Fruit. We are appointed to go and bear fruit. Fruit of the Spirit is love, joy, peace, patience, kindness, goodness, faithfulness, gentleness and self-control. Fruit for the kingdom is souls and disciples. Either of these should be the result of Christian appointment, increase in the Spirit and/or increase in the kingdom. When we are doing what God has chosen us for and appointed us for, there will be growth.

Fruit that remains. What we are appointed to do, will create fruit that remains. I spent a lot of time when I was younger doing street ministry. It makes you feel like your doing something to spread the kingdom. It makes you feel like your loving others. Handing out a track may feel like something, but when I go into a store and am handed a sample I very seldom buy it unless I really experience it. Christianity is built on relationship. Discipleship is built on relationship. It is not the one and done prayer that God is looking for, He wants us. He wants our lives to be transformed in His presence. He wants us to remain in Him. The fruit we bear doesn’t remain on the tree, it is used for sustenance and then reproduces.

So that whatever you ask of the Father in My name He may give to you. I will be honest, I’ve quoted this scripture before and never realized this line was part of it. Yet it makes sense, I have to accept that I am chosen and appointed to know that I can come boldly to the throne of God with requests. When I am bearing fruit in my life and for the Kingdom, and remaining in Him, my requests and desires are going to line up with His. I am going to be asking for things that continue that cycle of growth for myself and for others.

Chosen by God. Appointed to go and make a difference in the life of others for the Kingdom. Bearing fruit for the Kingdom that remains, and continues to bear fruit. When we are doing what God has chosen and appointed us for, we can ask of Him what we need and He will give it to us.