Therefore take up the whole armor of God, that you may be able to withstand in the evil day, and having done all, to stand.  Ephesians 6:13

I took a deeper look into this passage as my focus has been on warfare.

According to the Military Science Fiction there are three basic types of war:

Attrition War – forces attack to destroy enemy forces to destroy the ability to fight.  It is measured by ground captured and enemy destroyed.

Maneuver War – fought to destroy the enemy’s will to fight.  It involves risk and exploits weaknesses and fears.

Revolutionary War – seeks to evade destruction , turning the people against leaders and the leaders against the people.  It is about emotions and beliefs, killing is a means to an end, not the end itself. 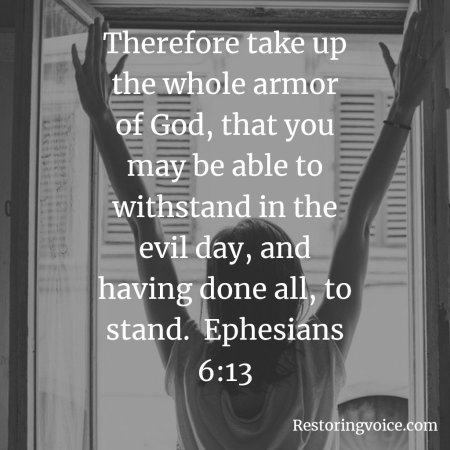 If I believe that Jesus finished everything at the cross, that the total price was paid and victory was obtained at the resurrection, then the war is already won.  This passage tells me that my role is to stand firm.

Satan often tries to convince me that the war is not already won.  He attacks me with all three types of war trying to tear me down.

Attrition War – He tries to make me think he has captured territory that is not his, like taking prayer out of school or legalizing abortion. Satan did not take that territory, he doesn’t have that power.   Christ finished it on the cross. As Christians, we backed away from the battle instead of taking a stand.  We gave the territory to him.

Maneuver War – Satan preys on my weakness and fears.  The Word says “My grace is enough for you, for my power is brought to perfection in weakness.” Therefore, I am very happy to boast about my weaknesses, in order that the Messiah’s power will rest upon me.  Christ finished it at the cross.  I have to stand firm in who God says I am instead of listening to the lies of the enemy.

Revolutionary War – Satan tries to convince me that God is mad at me.  He tries to turn me against God.  Satan convince me that God is not all the Word portrays Him to be based on the circumstances surrounding me. Satan tries to wedge himself into my deepest questions.  Those questions like “why would a good God allow ____ to happen.”  Christ finished it at the cross.  I have to stand on the truth of the Word and allow God to minister in those places.

Lord, You already won the war.  Remind me to stand on Your Word when Satan tries to wage battle.  It is finished.

I have been through a lot in life, but through Christ I am more than an overcomer. I am not perfect, I will never claim to be. Praise God I am forgiven though. I am rather opinionated. I see most things in black and white and believe honesty is always the best policy. This combination sometimes comes off harsh. The truth is I love people. I truly love helping others and try the believe the best about others. It is easy to find faults, but focusing on strengths is more my style, but I also shoot it straight. If it sounds harsh, know my heart is for something better for you
View all posts by Jackie S →
This entry was posted in Faith, Growth Process and tagged #Journey, Scripture, truth. Bookmark the permalink.