There is a lot of talk about the worth or value of a person. This is often tied to a person’s self-esteem or lack there of. It can lead decsions we make about many things. Too often, in our consideration of our own value we fail to consider the value placed on us by our Creator. We fail to consider the price that was paid for us.

We tend to cheapen our value as we accept as truth comments that tear us down or are contrary to the Word of God. Or we allow treatment to ourselves that we would not tolerate to anyone that we love or care about and that our Creator did not design us to tolerate. Or we place ourselves in situations that our Creator never intended us to be.

I started to think about how Christ, the Son of Man could have struggled with His value had He not had a deep revelation from the Father of His worth. Men spoke against Him.  They attempted to stone Him on several occasions. His death was a brutal one. Yet in it all, He knew what His value was.

How He really did experience what we go through. I often wonder if He might have experienced it on a deeper level because He knew what perfect love was like.  He experienced perfect love with the Father. I started thinking about how those close to Him valued Him.

Six days before the Passover, Jesus therefore came to Bethany, where Lazarus was, whom Jesus had raised from the dead. So they gave a dinner for him there. Martha served, and Lazarus was one of those reclining with him at table. Mary therefore took a pound of expensive ointment made from pure nard, and anointed the feet of Jesus and wiped his feet with her hair. The house was filled with the fragrance of the perfume. But Judas Iscariot, one of his disciples (he who was about to betray him), said, “Why was this ointment not sold for three hundred denarii and given to the poor?” He said this, not because he cared about the poor, but because he was a thief, and having charge of the moneybag he used to help himself to what was put into it. John 12:1‭-‬6 ESV

Mary held Jesus in high regard. She was willing to use costly perfume to anoint His feet. One danarius is said to be a day’s wages. So she was willing to give up a years wages to anoint the feet of Jesus.   Never mind that she wiped His feet with her hair.  I Corinthians 11:15 says that long hair is a woman’s covering, her glory.

Contrast Mary’s value towards Jesus to that of his disciple, Judas.

Then one of the twelve, whose name was Judas Iscariot, went to the chief priests and said, “What will you give me if I deliver him over to you?” And they paid him thirty pieces of silver. And from that moment he sought an opportunity to betray him. Matthew 26:14‭-‬16 ESV

Thirty pieces of silver was the value of slave who was accidently killed. If the ox gores a slave, male or female, the owner shall give to their master thirty shekels of silver, and the ox shall be stoned. Exodus 21:32 ESV

Judas valued Jesus, a “friend” he had walked along side of and served, as a slave. He was willing to give Him over to those who sought to kill Jesus for the price of a slave.  The thirty pieces of silver eventually bought the Field of blood, a potter’s field for the burial of strangers.

Then when Judas, his betrayer, saw that Jesus was condemned, he changed his mind and brought back the thirty pieces of silver to the chief priests and the elders, saying, “I have sinned by betraying innocent blood.” They said, “What is that to us? See to it yourself.” And throwing down the pieces of silver into the temple, he departed, and he went and hanged himself. But the chief priests, taking the pieces of silver, said, “It is not lawful to put them into the treasury, since it is blood money.” So they took counsel and bought with them the potter’s field as a burial place for strangers. Matthew 27:3‭-‬7 ESV 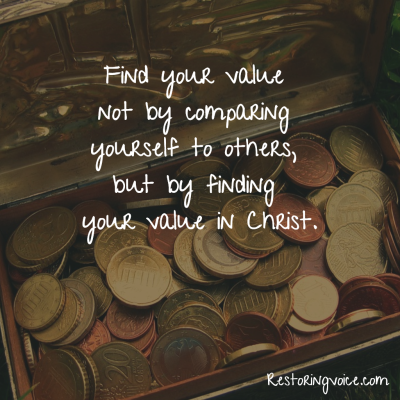 And then there were the secret followers of Christ. These men who followed Christ in secret.  Yet they still valued Him.

After these things Joseph of Arimathea, who was a disciple of Jesus, but secretly for fear of the Jews, asked Pilate that he might take away the body of Jesus, and Pilate gave him permission. So he came and took away his body. Nicodemus also, who earlier had come to Jesus by night, came bringing a mixture of myrrh and aloes, about seventy-five pounds in weight. So they took the body of Jesus and bound it in linen cloths with the spices, as is the burial custom of the Jews. Now in the place where he was crucified there was a garden, and in the garden a new tomb in which no one had yet been laid. So because of the Jewish day of Preparation, since the tomb was close at hand, they laid Jesus there.
John 19:38‭-‬42 ESV

Some commentaries point out that this amount of myrrh and aloes was excessive, enough for hundreds of bodies. They who followed Him in secret publically honored Him in death.

Jesus could have seen how others treated Him, or valued Him and discounted His own value. Instead He held tightly to what God said about Him. What an example for us to hold on to, in more ways than one.

First, how much do I value to gift that has been given to me by Christ? What am I willing to give up for Him? Does it look like the price of a dead slave or extravagant purfume?

Second, am I more focused on how others value me or how God does? Are the words I hear in my head or the scenes I play in my mind those of people? Or do I let those words pass through and hold on to the Words God has spoken over me? Am I focused on what others think I am worth or the value He placed on me? He holds my true value.

I have been through a lot in life, but through Christ I am more than an overcomer. I am not perfect, I will never claim to be. Praise God I am forgiven though. I am rather opinionated. I see most things in black and white and believe honesty is always the best policy. This combination sometimes comes off harsh. The truth is I love people. I truly love helping others and try the believe the best about others. It is easy to find faults, but focusing on strengths is more my style, but I also shoot it straight. If it sounds harsh, know my heart is for something better for you
View all posts by Jackie S →
This entry was posted in Faith and tagged Character, Focus, Love, Purpose, truth, Value. Bookmark the permalink.