Each year I try to do a Read Through the Bible in Year plan, in addition to other Bible studies that I might do.  I have also tried to change the version that I read each year for the past four or five years, because I realized that I often “knew” a verse, even through I didn’t have a full revelation of it.  I would find myself, even when journaling, just skimming the surface of things I “knew” instead of allowing God to really show me how it applies to my life right now.  I started memorizing scriptures when I was two, so there was a lot of skimming despite a love for reading the Word.

This year I decided to use the Message version.  I have steered clear of it since the version came out, other than when reading it in conjunction with a written devotional or book.  I liked the idea of easy to understand language, but when journaling, I like to be able to break down scriptures.  With The Message Bible, it is usually passages with multiple scriptures lumped together.  To be honest, sometimes I really don’t want to write all that at one time.  Reading through the Bible in a Year, I thought would be a good way to hear (As I generally listen to that) and just go back and focus on things that really stuck out.  It didn’t take long! 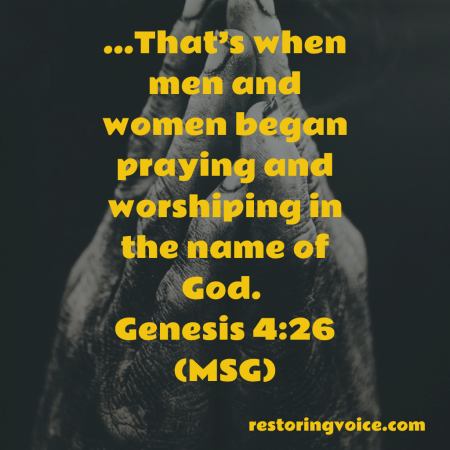 The end of Genesis 4 says “Then men began to call on the name of the Lord.” (NKJV)  I have read it at least a dozen times if not more in my life.  But today, it grabbed my attention: “That’s when men and women began praying and worshiping in the name of God.” (MSG)

I get Adam and Eve. God walked in the Garden of Eden (Genesis 3:8) with them.  So praying to Him might be weird.  Like talking in 3rd person or about someone like they are not standing right in front of you, weird.  They were also the 1st humans.  Most kids, even with famous parents don’t “worship” them, especially when the children have to face the consequences of bad choices.

I can understand Cain not praying or worshipping God. I mean, he was cursed after murdering his brother.  Abel of course was dead, so no prayer or worship there.  Scriptures indicate that both Cain and Abel brought their gifts to the Lord (Genesis 4:3-4).  Maybe the relationship that they had with God was one of a more intimate nature.   God was after all, their grandpa!

But what about Seth?  What was his relationship with God like?  There are only nine scriptures that mention Seth and eight that mention his son, Enosh.  There is a genealogy in the following chapter followed by the commission to Noah to build the Ark in the sixth chapter of Genesis as the people were so wicked. There is 105 years from Seth’s birth to the birth of Enosh.  There is almost no information about any relationships or interactions with God at all; other than Enoch, five generations down, walking with God.

Did they become so distant from God that they had to call out to Him?  Or did they have a new understanding of God, so the only thing they could do was worship Him.  As I asked myself these questions, I realized I may never know what happened in those years.  Why at that point in Scripture it is important to know that something changed.

What I can know is that I want to walk with God.  I want the intimacy of just being able to talk with Him.  I love that I can just talk, or even think and He hears me (Isaiah 65:24).  I have the privilege of praying to Him (Philippians 4:6) and worshipping Him (John 4:24).  But I also have the ability to fellowship with Him (I Corinthians 1:9).

I have to ensure that I don’t hide from God as Adam and Eve did in the garden.  Although I might feel guilt for my actions nothing is hidden from Him, so I have no reason to hide.  I also have to ensure that I don’t let my sins separate me from Him like Cain did.  Jesus paid the price to close the gap that sin leaves.  Thanks to what Jesus did on the cross and the gift of the Holy Spirit, I have that choice.

I have been through a lot in life, but through Christ I am more than an overcomer. I am not perfect, I will never claim to be. Praise God I am forgiven though. I am rather opinionated. I see most things in black and white and believe honesty is always the best policy. This combination sometimes comes off harsh. The truth is I love people. I truly love helping others and try the believe the best about others. It is easy to find faults, but focusing on strengths is more my style, but I also shoot it straight. If it sounds harsh, know my heart is for something better for you
View all posts by Jackie S →
This entry was posted in Faith and tagged Faith, Relationship, Scripture. Bookmark the permalink.