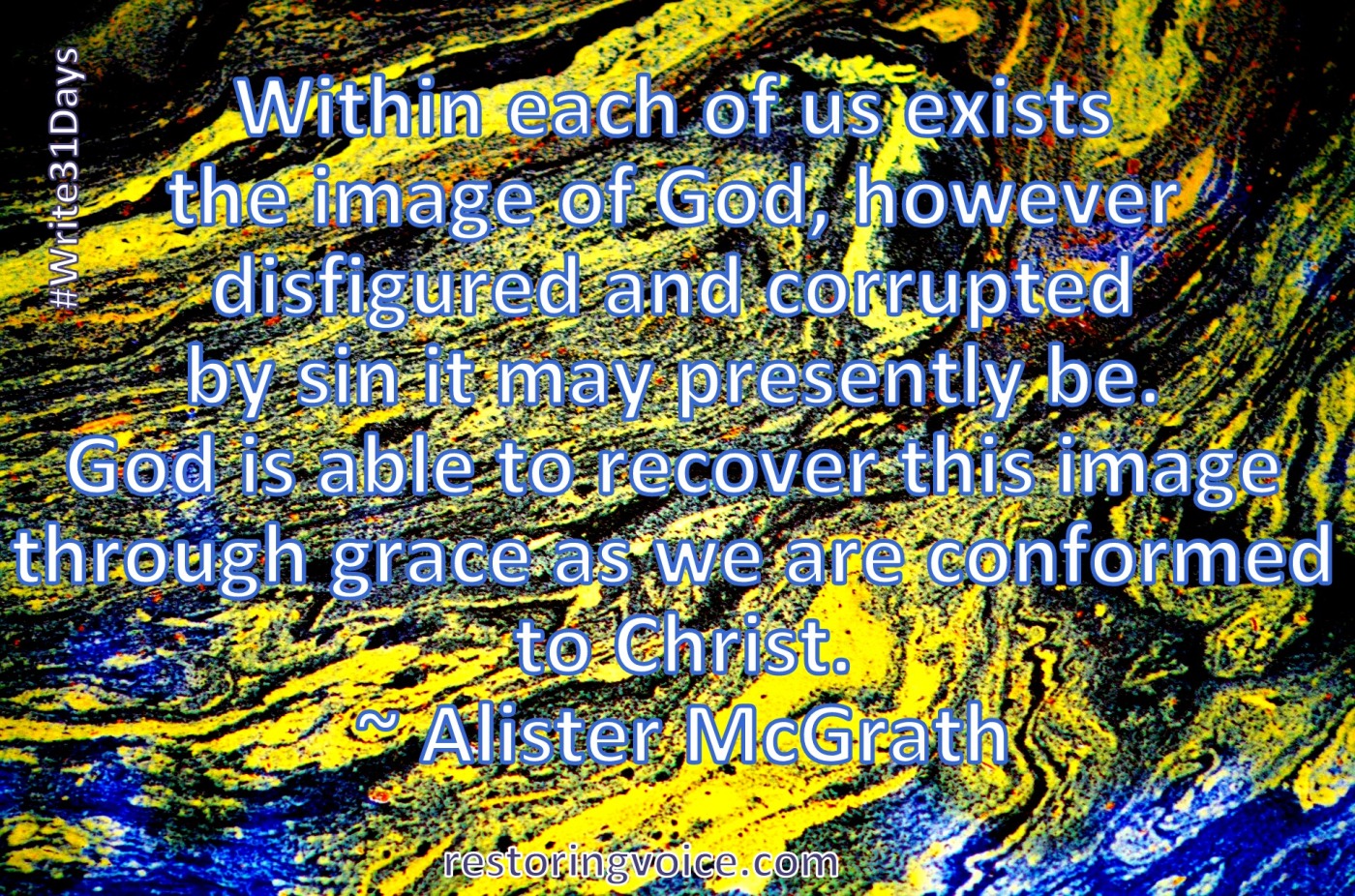 So all of us who have had that veil removed can see and reflect the glory of the Lord. And the Lord—who is the Spirit—makes us more and more like him as we are changed into his glorious image.  II Corinthians 3:18

I am the proud Mimi of four babies.  I am so amazed at how quickly they change and how fast they grow.  I am also intrigued by how they can look like both parents at the same time.  Two of my grandchildren favor my children, two favor the other parent.  Yet there are times where each still conform to look like their non-dominant parent.  A facial expression, a mannerism, a gesture can make them look just like the other parent. 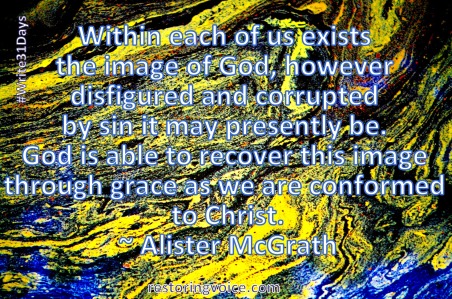 When we become Christians, God is our non-dominant parent.  His image is there inside of us, but we need to allow His grace to transform us into His image.  As we submit to His will we begin to slowly conform into His image.  Usually we have lived so long in the world, that this is a slow process and times where it is reflected, then it goes away.  These mannerisms or gestures come and go until we decide to let them be our first nature or choose to reject them all together.

There are many areas where I struggle with conforming to the image of Christ.  I know that through His grace I can exhibit His image.   Often out of disobedience and selfish ambition I  struggle with allowing His image to show though, especially consistently.  Instead my disfigured and corrupted image comes through more often than I care to admit.

I am by human nature very selfish.  While I have worked hard to submit to God in this area, there are still people who can draw on this nature and bring it back to the light.  People who are more passive in nature or who genuinely desire for me to be happy and thus try to do it by giving me my way – these people can be very bad for me in large doses.  I have to allow God’s grace to really cover me in this area because all too quickly that disfigurement of selfishness can come to the surface and distort the Godly image that I have been conforming too.  It comes out less and less, but I still have to guard my heart.

Another area where I have had to grow in the image of Christ is with my temper.  I used to very easily fly off the handle.  This is even more pronounced because I am typically assertive, direct and can be loud.  My temper used to be a several times a day occurrence most days out of the week.  As I grew closer to God, my explosions moved to a few times a week, then a few times a week.  Now they are pretty rare.  I won’t pretend I don’t still have those moments where I do.  Or that I don’t have moments when I really would like to just fly off the handle but make the concerted effort not too.  I know I am still working to grow into the image of God in this area.

An area where He has been working recently is my insecurity.  God had to show me that the root of my insecurity, as there are several, is pride.  This became ultimately clear in the following from Beth Moore:

Another root of insecurity is pride.  it’s about ego, and we all have one.  Some people and situations make us feel insecure because they nick our pride, plain and simple. Give so thought to the glaring connections between the two:
Just because pride fills a heart doesn’t keep it from breaking.  It just keeps it from healing.
pg 101
Moore,B. (2010). So Long, Insecurity You’ve Been a Bad Friend to Us. Carol Stream, IL: Tyndale House Publishers, Inc.

I chose to read the book looking for why despite my confidence, I am insecure.  The first few chapters I could not relate to at all, but when I read the above, I knew this description was talking about me.  I had to discover that although all of the statements above are true, they do not change my worth and value.  For over eight years I have taught people who their worth and value are found in Christ, yet I didn’t realize how much of my own worth and value I was trying to derive from someone and something else.  The knowledge of my deception was the first step.  Truly letting it go and walking in the Truth is needed for me to conform to the image of God.  I am growing into the image of God that is already within me in this area.

We all have areas in our lives where the true image of God has not yet taken shape in our lives.  We have areas where we reflect Him daily and His radiant light flows for all to see.  We also have areas where the struggle exits to move from our old nature to the nature of Christ.  Places where at times we reflect a disfigured and corrupt image and at times we are able to allow the grace of God to conform us into His image.  Daily we grow into His image as we submit to His will and ways.

This blog is part of a #Write31Days series on growth.  31 Days is an online writing challenge, where bloggers pick one topic and write a post on that topic every day.

3 thoughts on “Growing in His Image {#Write31Days}”