There are many scriptures that talk about the power of your words. A few scriptures from the Word include:

Death and life are in the power of the tongue; those who love it will eat its fruit. Proverbs 18:21

Whoever guards his mouth and his tongue keeps his soul from troubles. Proverbs 21:23

I tell you that every idle word that men speak, they will give account of it in the day of judgment. Matthew 12:36

That which enters into the mouth doesn’t defile the man; but that which proceeds out of the mouth, this defiles the man.” Matthew 15:11

But the things which proceed out of the mouth come out of the heart, and they defile the man. Matthew 15:18 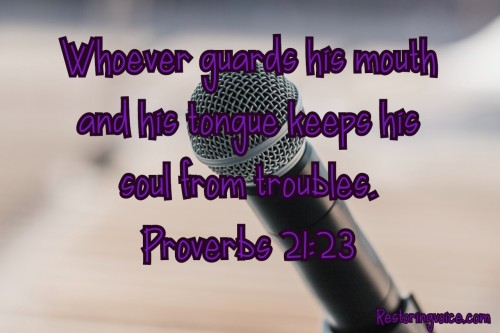 Imagine my surprise as I was reading the Bible and came across this Old Testament passage that I never noticed before that just goes to prove words have power.

The whole earth was of one language and of one speech. As they traveled east, they found a plain in the land of Shinar, and they lived there. They said to one another, “Come, let’s make bricks, and burn them thoroughly.” They had brick for stone, and they used tar for mortar. They said, “Come, let’s build ourselves a city, and a tower whose top reaches to the sky, and let’s make a name for ourselves, lest we be scattered abroad on the surface of the whole earth.”

Yahweh came down to see the city and the tower, which the children of men built. Yahweh said, “Behold, they are one people, and they have all one language, and this is what they begin to do. Now nothing will be withheld from them, which they intend to do. Come, let’s go down, and there confuse their language, that they may not understand one another’s speech.”

The very thing that the Babylonians had said they were afraid would happen, what they committed to build the tower to prevent, happened just as they said. They were afraid of being scattered across the earth. God did what they said because of their actions.  Words have power, even when it looks like our actions are contrary to what we speak.  They were building a place to stay.  They spoke fear of being scattered.  Their words created the outcome.

We must realize we can’t speak negative and get a positive result.

We can’t speak sickness and death and have healing.

We can’t speak poverty and gain provision or wealth,

I admit at times those negative confessions come out of habit and at times frustration.  Yet, it is important that we recognize the power in our words and do our best to line our words up with God’s Word.  When we hear our words being contrary to God’s best we need to alter our words with a BUT and add Truth from God’s Word.  If they have slipped out and time has passed, we need to repent and begin to speak life back into the situation from God’s Word.  It takes some work, but if you practice the positive long enough, the negative will become less and less.  The creative words of your life will be filled with the power of God instead of the destruction of the world and enemy.

I have been through a lot in life, but through Christ I am more than an overcomer. I am not perfect, I will never claim to be. Praise God I am forgiven though. I am rather opinionated. I see most things in black and white and believe honesty is always the best policy. This combination sometimes comes off harsh. The truth is I love people. I truly love helping others and try to believe the best about others. It is easy to find faults, but focusing on strengths is more my style, but I also shoot it straight. If it sounds harsh, know my heart is for something better for you.
View all posts by Jackie S →
This entry was posted in Hope, Restoration and tagged communication, Scripture, truth. Bookmark the permalink.
Loading Comments...
Comment
×
%d bloggers like this: