My heart leapt from my chest when he uttered those three little letters.  I had no idea how much it would mean to me to hear him refer to it with that word.  We had talked many times about it, but today provided a level of hope for my soul that I hadn’t expected, especially based on three little letters.

What was different about this day than the other days that we had spoken of it?  He referred to it terms of “us” instead of “mine” or the neutral word “the.”  After twenty years of prayer, several years of progress, and almost a full year of active attendance, he said “our church.”  It was no longer just the church, or my church.  “Our” to me stated it was a place where he belonged.

It isn’t even about “our church” but about the journey that we have walked over the past twenty years.  The journey where I said “yes” and then completely turned our lives upside down.  We had been in church before we remarried.  We went to  premarital counseling and with three little letters, we said “I do.”  The following day we moved several hours away so that I could go to school.  He supported our family, but there was nothing for us in a college town.  We both started walking down completely different paths. 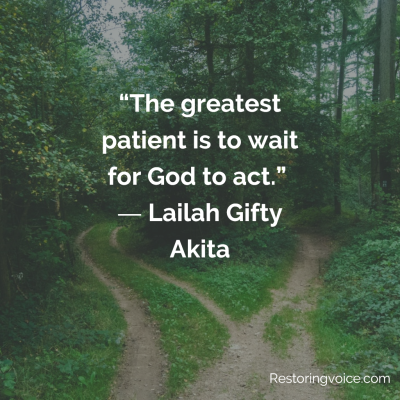 I went after God and I left my husband behind.  Those three little letters “G-o-d” changed my trajectory.  I started living differently; maybe a better description is that I stopped doing all the things that we had always done together.  It wasn’t that I expected him to change for me; I never asked him to change.  I knew the change could not be my request; I felt like the year prior had been at my request and it wasn’t lasting.  The issue was I changed and had no desire to continue walking on the path that we had been walking on.  Each day that passed, our paths grew farther and farther apart.

As much as I wanted my husband to walk beside me, the deeper my desire, the more we butted heads.  He never asked me to change.  I never asked him to change.  We both just exerted our independence and our differences continued to highlight our relationship.  If there had not been a deep level of commitment and love, I am not sure we would have pressed through some of those years.  They were rough.  Sometimes they were downright ugly.

I would love to say he was the one who needed to change, but that would only be half the story.  What I learned through this past twenty years is that I needed more change in my heart than he needed change in his actions.  I needed a lot of pruning and discipline in my life, and maybe looking back, had he started walking beside me, I might not have submitted to some of those lessons.

I never stopped praying for my husband to walk alongside of me, and to submit his life to God.  What I never would have guess is that another three-letter word would lead to the change that I had been praying for.  One of the men in our church decided to start a “Run for God” group.  Understand, I had never run in my life, never.  My husband ran track before we met, but had not run to my knowledge since we got together.  I asked if he would be interested.  He agreed to do it.

Several of the men came along side him encouraging him and sharing their own stories.  Then he started coming to church, that was around nine and half months ago.  The times he has missed, he has had a legit reason for not being there.  I remember coming home one day from breakfast with a friend, he was getting ready to leave.  I asked where he was going, and his response was “To the men’s meeting.” as if he had attending every other men’s meeting before.  The “joy” that I felt that day was another 3 letter word that can hardly contain the meaning behind it.  Conversations that have followed have just continued to grow that joy.

I have said if I knew that all it would take was running to get my husband to step out and be the man who God created him to be, I would have started running the day after we married.  I look at the circumstances that have occurred over the years and know that God’s plan and purpose has prevailed.  I may not ever completely understand why, but I know that this is just the beginning of our journey!