We placed an offer on a house in March. It was an unexpected decision, but felt right. As I looked at the pictures of the house after we made the offer, I told my husband that the kitchen table we have didn’t really go with the home. I have an old Nostalgia Oak Pedestal Dining Table that my father bought my mother. They have both passed away and really didn’t leave a lot behind. I have not been able to part with the table as it holds a lot of memories for me.

I told my husband I wanted to refinish the table and chairs to match the new home, with the stipulation that if the end result is not what I want, we would buy a new table. I  can’t fathom not having this table.  Although, honestly it has never been my style, despite buying an identical one when we bought our first home.

I am not really a crafty person, but I am a sentimental person.  I really had no clue what I was doing, but I started the project after watching a few videos on YouTube.  It was not as easy at the videos make it look.  It took much more time and effort than I anticipated.

I stripped the table and chairs with a chemical stripper and scrapper, some part came off easy.  Other areas were resistant to everything I tried.  Then hand sanded each part, although probably not as much as I should have.  I realized this after I started painting.  I painted the base of the table,  and the chairs.  Each step of the way, I would think they were 100% covered only to find out that many spots were still missing.

Along the way my daughters helped me as they sensed my frustration and knew how important it was to me.  Eventually, when I got to the top of the table I had to step away and let my husband finish the top.  I could not let go of what I saw in my head.  The finished project I love.  As I moved it into our home, I knew that it was just as it should be. 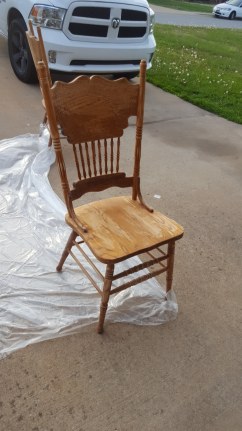 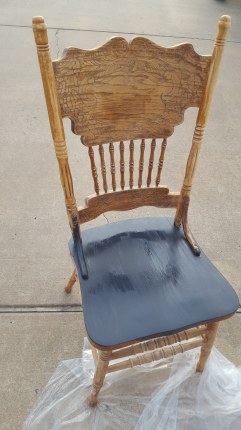 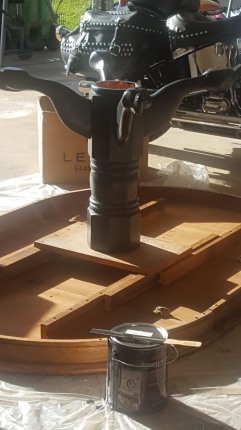 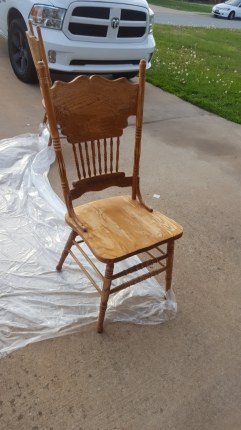 As I reflect on this “little project”, I thought about how it symbolizes what God has done in my life.  I like to think that there is just a little work He needs to do in me, but each step of the way more of the project is revealed.  Thirty-four years into my Christian walk, I know He still has more work to do in me.  I am thankful He saw pass what I looked like on the outside and knew that He could give me a makeover to turn me into what He wanted.

I watch the Christian videos and the quick steps to success in your Christian life.  It is so much harder to walk out in real life.  Dying to flesh, just when I think it’s dead, I realize there is another layer that needs to be removed.  Christ’s blood covers me, but I realize there are a lot of times that I try to hide areas that I have not allowed Him to cover.

There are times that Christ has brought other people into my life to help me get to the next stage.  God uses other people because at times, I would just wander around in the wilderness for forty years with the same issue, never making progress.  He brings others into my life that will offer a fresh perspective or challenge my complacency.  There are some areas that God has placed other people to bring about a complete change in my life, so positive influences, others negative, but the result is the same – taking me to another level with Him.

When I look back on my life, I see the areas where God has done the most work.  There are some areas of my life that are hardly recognizable to me.  I had someone ask me the craziest thing I had ever done.  I still haven’t answered because that is so very hard to pin down as the person I used to be.  I finally told the person I didn’t want to ruin their opinion of who I am now. God has made me completely over.  I know I’m still a work in progress, but He’s made a place for me in His house, and for today, I am just as I should be.