David is one of the few people in the Bible that we get to see most of his life, and most of it up close and personal.  David came on the scene in I Samuel 16 as the prophet is told to go an anoint David in Saul’s place as king.  Saul is still living, but the favor of God has left him.

The first descriptions of David are found in 1 Samuel 16:12 So Jesse sent for him. He was dark and handsome, with beautiful eyes. And the Lord said, “This is the one; anoint him.” Samuel describes his outward appearance, God was looking deeper.

1 Samuel 13:14 (NLT)  But now your kingdom must end, for the Lord has sought out a man after his own heart. The Lord has already appointed him to be the leader of his people, because you have not kept the Lord’s command.”

A few verses down in 1 Samuel 16:18 David is described by a servant.  One of the servants said to Saul, “One of Jesse’s sons from Bethlehem is a talented harp player. Not only that—he is a brave warrior, a man of war, and has good judgment. He is also a fine-looking young man, and the Lord is with him.”

David’s  family looked over him.  God considered David to be a man after His own heart.  Then a servant places David in the palace before the king whose very place David will one day take.  I can not imagine the thoughts that would have run through David’s mind – fear that Saul might know what Samuel did, insecurity in Samuel’s actions being right, a little cockiness at the idea of being called on by the king he would soon replace.  The Bible doesn’t tell us, but David is young and often flooded with changing emotions. 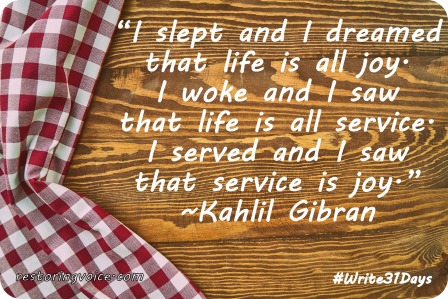 David was taken from serving his family in the family business, to serving the king in the palace.  Then we find David back home with his father sending David tot he battlefield with lunch for his brothers.  David comes upon Goliath tormenting the Israel army.  David gets mad and wants to slay Goliath.  His brother got mad because David’s motives must be bad.

But when David’s oldest brother, Eliab, heard David talking to the men, he was angry. “What are you doing around here anyway?” he demanded. “What about those few sheep you’re supposed to be taking care of? I know about your pride and deceit. You just want to see the battle!” 1 Samuel 17:28

David kills Goliath and soon Saul becomes jealous of him.  Saul goes into fits of rage and throws spears at David while he is serving.  Saul sets David up time and time again to be killed, and each time David escapes successfully.  David has to flee for his life, but still maintains a loyalty towards his service to Saul.  Twice Saul is in a place where David could have taken his life, but David refrains.  For the rest of Saul’s life he plays this cat and mouse game with David trying to take David’s life.  When Saul dies, David mourns Saul before and then he honors what is left of Saul’s family after he becomes king.

David is described as a man after God’s own heart.  David knew that at the heart of God was service.  Matthew 23:11 say “The greatest among you must be a servant.”    A servant is one who executes the demands of another, taken from the Greek word diakonos.

I believe we have a distorted view of what servanthood looks like.  We do not mind executing the demands of another as long as the request is done in a politically correct manner.  We can not be offended by the request.  Saul told David to bring him the foreskins of 100 Philistines for Saul’s daughter’s hand in marriage – the daughter that was promised for killing Goliath, it is all pretty offensive.

Truth be told, it is politically incorrect to demand anything.  Possibly it would be better if a strong suggestion was made instead.  We want service to look like we want it, be what we want it to be, and at the time that we want it to be.  If David had been in the 21st Century, activists spewing political correctness would be lining up in David’s defense of the wrongs that were done to him  every step of the way.

If I am completely honest, I like politically correct service more than the sold out service God requires. I like to think that I serve, because I physically do.  However, I serve inside the time frames that I allot.  I might let it run over a little bit, but rarely do I let myself be inconvenienced to serve.  Because of my career field I do serve people who don’t necessarily treat me right, but I can guarantee if one of them tried to kill me or threw something at me, my service to them would be over.  I have also served people who hated me, but it certainly is my preference to serve those who appreciate what I am doing for them not those who are ungrateful.  I prefer the freedom to serve, not being told I have to.

So how do I grow in service like David did?

I ask God to give me His eyes. It is easy to focus on what others aren’t doing for themselves.  Or on their gratitude or lack there of.  It is easy to look at the need I am serving instead of seeing the person who has the need.  I need God’s perspective.

I stay in a place of gratitude.  I can only serve others because I live a blessed life.  No I may not have everything, but I do have something.  When I stay focused on what I have to offer instead of what I lack, it is easier to serve.

I seek after God’s heart.  I know that my service shines brighter when I allow God to work through me instead of thinking I am working for God.  I serve because I belong to God, not to make myself belong to Him.  Service is out of love, not duty.

This blog is part of a #Write31Days series on growth.  31 Days is an online writing challenge, where bloggers pick one topic and write a post on that topic every day.

I have been through a lot in life, but through Christ I am more than an overcomer. I am not perfect, I will never claim to be. Praise God I am forgiven though. I am rather opinionated. I see most things in black and white and believe honesty is always the best policy. This combination sometimes comes off harsh. The truth is I love people. I truly love helping others and try the believe the best about others. It is easy to find faults, but focusing on strengths is more my style, but I also shoot it straight. If it sounds harsh, know my heart is for something better for you
View all posts by Jackie S →
This entry was posted in Faith and tagged #OneWord, #Write31Days, Growth, Purpose, Scripture. Bookmark the permalink.