When I think about judging others, and if I’m honest I do it more than I should, I am comparing how I do something or see something with how someone else responds.  Generally, when I am judging someone, I myself as better than someone in a particular area.  Or possibly, I judge them to be better than me in an area.  I can judge and maintain a relationship with someone, as generally judging is a comparison.  I compare how bad I think someone else is to how good I think I am in that area, or vise versa.

Exercising good judgement on the other hand, I am going to set a clear boundary for the protection of myself or my family.  It t as much about what the person is doing, but more about what I am willing or not willing to allow in my life.  I may or may not maintain a relationship, but there will definitely be a line drawn of how much the other person has access to me or to my family. 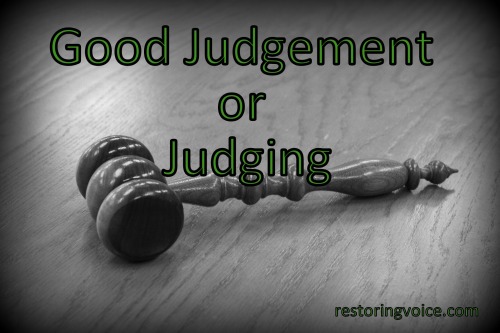 When I think about exercising good judgement, I think about my marriage.  When I filed for a divorce, twenty-two years ago, the life that my husband had gotten in to was not one that I wanted my children involved.  It wasn’t me judging him, it was me using good judgement.  I offered two options – stop or leave.  Divorce was the route I had to take.  There was no judgement on my part of him, although I admit I was disappointed.  I just could not allow what he was doing at the time around our children, regardless of how much I loved him.  It was not an easy call to make, but it was the right one at the time.

That good judgement set clear boundaries for him, and gave him the courage to make the changes that he needed, on his own to regain his family.  It is an amazing and powerful testimony of what God can do.

I look back on our twenty-six years together – dating, marriage, divorce, and then our  remarriage and the last eighteen years.  I think about all the trials and pain we have cause each other, and how many times I really thought of calling it quits (As I am sure he did too.) and I see not only the change in both of us and our relationship, I see the growth that happened in my life that would not have taken place without the trials.

I tell people now, as much as I wanted God to reach down and just change my husband, if He had, I would not be where I am today.  God has done a big work in my husband’s life, but I learned that the biggest change happened in me.  My dependence on God grew stronger and he worked out things in me as He worked through me in my marriage.

One the contrast, hen I think about judgement, I immediately think of Christmas.  Having worked with foster children, I saw the limited resources allowed for children’s Christmas.  Literally, I had $15 per child to buy for their Christmas.  Some of these children were in families that would buy them presents to supplement what was provided, but a vast majority of the children I worked with were in a residential setting, and had no one in their life who would bring them anything.  It was an eye-opening experience when I brought the things home for my 25 children, and my own children wanted to know who the gifts were for.  The large pile of gifts paled in comparison to the gifts that the three of them would see on Christmas morning.  The children I worked with were so grateful for what I was able to get on their list for the $15.

Fast-forward about eight years and I was working in a nonprofit situation with parents and their children.  The blessings were abundant in our community towards these families.  I was overwhelmed at the generosity.  They were given wish-lists and nothing was really off-limits for the asking.  If only one group had provided, it would have been as much as I was used to buying for my children, but three or four groups did this for each family and then a few groups would buy specific things.  It was extravagant, and lasted the two weeks before Christmas almost daily.

One night, the first year I worked there I stayed for one of the events.  I was in awe of the outpouring from the community to these families. Until one of the children made a comment that just got all over me.  The child was upset not about what was in the package he opened, but by the color of a rather expensive gift.  I was enraged by the entitlement and lack of gratitude that the child showed, and then in-kind the parent had.

I was very judgmental about the entire event.  I wasn’t comparing them to me – but what I experienced at the nonprofit compared to what I had experienced from child welfare system.  The sad part was, the children weren’t much different from each other – only the phone call that got them removed from the home versus getting a little help in advance.   I said something to the parent and the child the following day, but I was definitely not thinking nicely of how they handled the situation.

The only thing I learned from that situation, was to stay away from those events at Christmas time.  I could not stop the response of the children or parents in regards to their entitlement.  I could not make them grateful for the community outreach.  I did implement a few things, and the next years stressed giving thanks and giving back through their time to help them understand the value of the gift that was really being extended to them outside the material item they held in their hands.

I have been through a lot in life, but through Christ I am more than an overcomer. I am not perfect, I will never claim to be. Praise God I am forgiven though. I am rather opinionated. I see most things in black and white and believe honesty is always the best policy. This combination sometimes comes off harsh. The truth is I love people. I truly love helping others and try to believe the best about others. It is easy to find faults, but focusing on strengths is more my style, but I also shoot it straight. If it sounds harsh, know my heart is for something better for you.
View all posts by Jackie S →
This entry was posted in Hope, Musings and tagged hope, Relationship, Testimony. Bookmark the permalink.