I was listening to Matthew 16 on the drive to work:

21 From then on Jesus began to tell his disciples plainly that it was necessary for him to go to Jerusalem, and that he would suffer many terrible things at the hands of the elders, the leading priests, and the teachers of religious law. He would be killed, but on the third day he would be raised from the dead.

22 But Peter took him aside and began to reprimand him for saying such things. “Heaven forbid, Lord,” he said. “This will never happen to you!”

23 Jesus turned to Peter and said, “Get away from me, Satan! You are a dangerous trap to me. You are seeing things merely from a human point of view, not from God’s.”

Here was Jesus telling his disciples that He was about to walk into one of the most trying yet necessary times of His purpose on earth.  And Peter tries to tell Jesus  in so many words, “No that can’t happen.”

The nerve.  Who does this guy think He is?   Does He know who he is talking too?  That was my thought. Condemnation of Peter, a man of God.  Jesus’ disciple.  A man who eventually reached more people than I could possibly consider.

Judgement, I admit it is one of my worst traits.  I felt a quick, yet familiar check in my spirit.  “How can you judge Him?  You do it too,  Jackie.”  The still, quiet voice that frequently challenges me.  “You often try to stop My purpose too.” 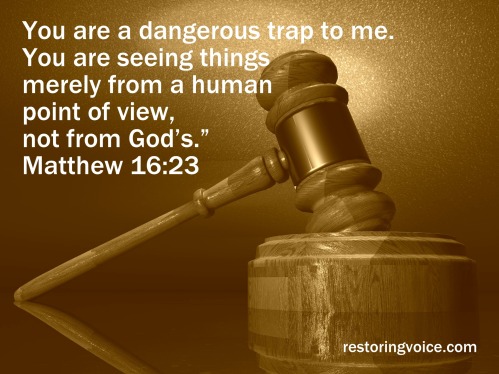 I rode the rest of the way contemplating the thought.

How many times have I heard that same still small voice tell me to do something and chose not to?

How many times have I felt the need to step out and froze instead?

How many times have I spoken discouragement over someone else’s purpose being a dangerous trap?

I have been through a lot in life, but through Christ I am more than an overcomer. I am not perfect, I will never claim to be. Praise God I am forgiven though. I am rather opinionated. I see most things in black and white and believe honesty is always the best policy. This combination sometimes comes off harsh. The truth is I love people. I truly love helping others and try the believe the best about others. It is easy to find faults, but focusing on strengths is more my style, but I also shoot it straight. If it sounds harsh, know my heart is for something better for you
View all posts by Jackie S →
This entry was posted in Faith and tagged Faith, Lessons, Purpose, Scripture. Bookmark the permalink.