Trust in His Name {#Write31Days}

There is power in God’s name.  Before I knew what spiritual warfare was, I knew I could trust in Jesus’s name when the enemy came against me. I know some people don’t believe in the evil presence in this world, but I know that it is real.  As a child, I was raised in a Baptist church.  I asked Jesus to be my Savior when I was eight years old.  I was baptized shortly after.  I served Him with my whole heart, even when my family stopped going to church.  Then in my teenage years, I started to rebel and I walked away from church until I was in my late teens. 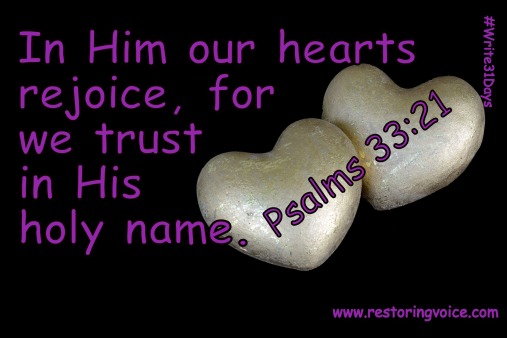 As a teenager, I had gotten involved with someone who had been involved in the occult.  Although I knew about it and had heard rumors of the group, I was never exposed to it. To my knowledge the boyfriend was not actively involved in the occult when we dated, but we had discussed it briefly. His past didn’t give me pause, I wasn’t even in church at the time.

Fast forward several years, and I had started attending church with my sister at a Full Gospel church.  It wasn’t very long before I was under full on attack of the enemy.  Initially, I had no clue what was going on.  When I would go to bed a night, a deep sense of fear would rise up.  There was a heavy presence in my room that made me feel bound.  If I would close my eyes, I would see evil things. I would open them and couldn’t get the images out of my head.  I don’t even have words to describe, but it was almost like a video would play of things like blood covered human skulls, human sacrifices, chants around an upside down pentagram.  Night after night this would go on.  I couldn’t sleep and I didn’t know what to do.

One night laying there and remembered Jesus had  cast out demons and they went away.  When the heaviness would come, and the fear would rise I would just lay in my bed and sing “Jesus love me.”  I did that for a solid week every time that the spirit would come.  Sometimes several times a night, usually for hours at a time.

I talked with my Sunday School teacher and she tried to help me understand.  I knew I was a Christian, so I didn’t understand how the enemy could get to me like this.  I had never heard about attacks of the enemy, how we open doors, and about spiritual warfare before.  Eventually the heaviness no longer came, the fear didn’t seize me, and the visions stopped.  There is so much more to spiritual warfare that I have learned in the two decades following that experience.  And there is much more I still need to learn.  That week though,  I learned to trust in Jesus Holy name.  I learned that Jesus truly meets us where we are.  We do our part, and He will do the rest.

My heart rejoices at the name of Jesus.  There are songs that the Church now sing about His Name, and I love to just insert His name in them when they sing of His power.  there is a deep sense of joy all around when I focus on His name. There are very few things that  cause me to even pause to fear.  Not that I am not cautious or knowingly put myself in situations where I give an open door to the enemy, but I know that God is greater. 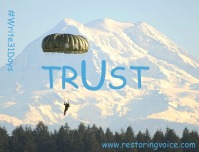 This blog is part of a #Write31Days series on trust.  31 Days is an online writing challenge, where bloggers pick one topic and write a post on that topic every day.

I have been through a lot in life, but through Christ I am more than an overcomer. I am not perfect, I will never claim to be. Praise God I am forgiven though. I am rather opinionated. I see most things in black and white and believe honesty is always the best policy. This combination sometimes comes off harsh. The truth is I love people. I truly love helping others and try the believe the best about others. It is easy to find faults, but focusing on strengths is more my style, but I also shoot it straight. If it sounds harsh, know my heart is for something better for you
View all posts by Jackie S →
This entry was posted in Faith. Bookmark the permalink.

1 Response to Trust in His Name {#Write31Days}