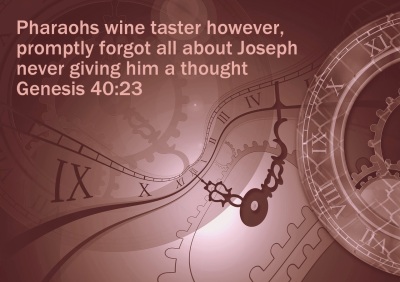 Genesis 40:14-15 (NLT)  “And please remember me and do me a favor when things go well for you. Mention me to Pharaoh, so he might let me out of this place.  For I was kidnapped from my homeland, the land of the Hebrews, and now I’m here in prison, but I did nothing to deserve it.”

For two years after Joseph interpreted the dreams, he continued to sit in prison.  It had to be discouraging for Joseph to know that he had shared what God had showed him for the baker and the cup-bearer, and yet Joseph was still in prison, for a crime he didn’t commit.  He received God’s favor, but part of him had to be discouraged to still be imprisoned after so much time had passed.  He might have felt alone and forgotten, even as he was trying his best to serve God.

He might have gotten upset at the cup-bearer for forgetting what he had promised to do.  Or maybe he related to him on some level.  When don’t know 100% of Joseph’s story, only the highlights.

As I thought about this,  I wondered how often do we make promises, and then fail to follow through on them, I know that I have made promises with the best of intention at the time, and then forgot when the time came.
Or how often are we on the receiving end of a delayed promise.  Where others make promises and they don’t deliver.
On the flip side of this story, the what if is there.  We know how the story ends, but Joseph didn’t.

I realized sometimes we need to look at those delayed promises for the hand of God.  What if the cup-bearer had kept his promise, and Joseph had been released.  Without interpreting Pharaoh’s dream he would not have become second in command and he could not have saved Egypt or Israel in the time of famine.

We can never know the what if’s in our life.  The things that God orchestrates behind the scenes for our benefit, or the benefit of others.  It is easy to become inpatient in the waiting, to be disappointed at the delayed promise, but what if, the delay is because God is working His perfect timing.  What if?

I have been through a lot in life, but through Christ I am more than an overcomer. I am not perfect, I will never claim to be. Praise God I am forgiven though. I am rather opinionated. I see most things in black and white and believe honesty is always the best policy. This combination sometimes comes off harsh. The truth is I love people. I truly love helping others and try the believe the best about others. It is easy to find faults, but focusing on strengths is more my style, but I also shoot it straight. If it sounds harsh, know my heart is for something better for you
View all posts by Jackie S →
This entry was posted in Hope and tagged Patience, Scripture. Bookmark the permalink.