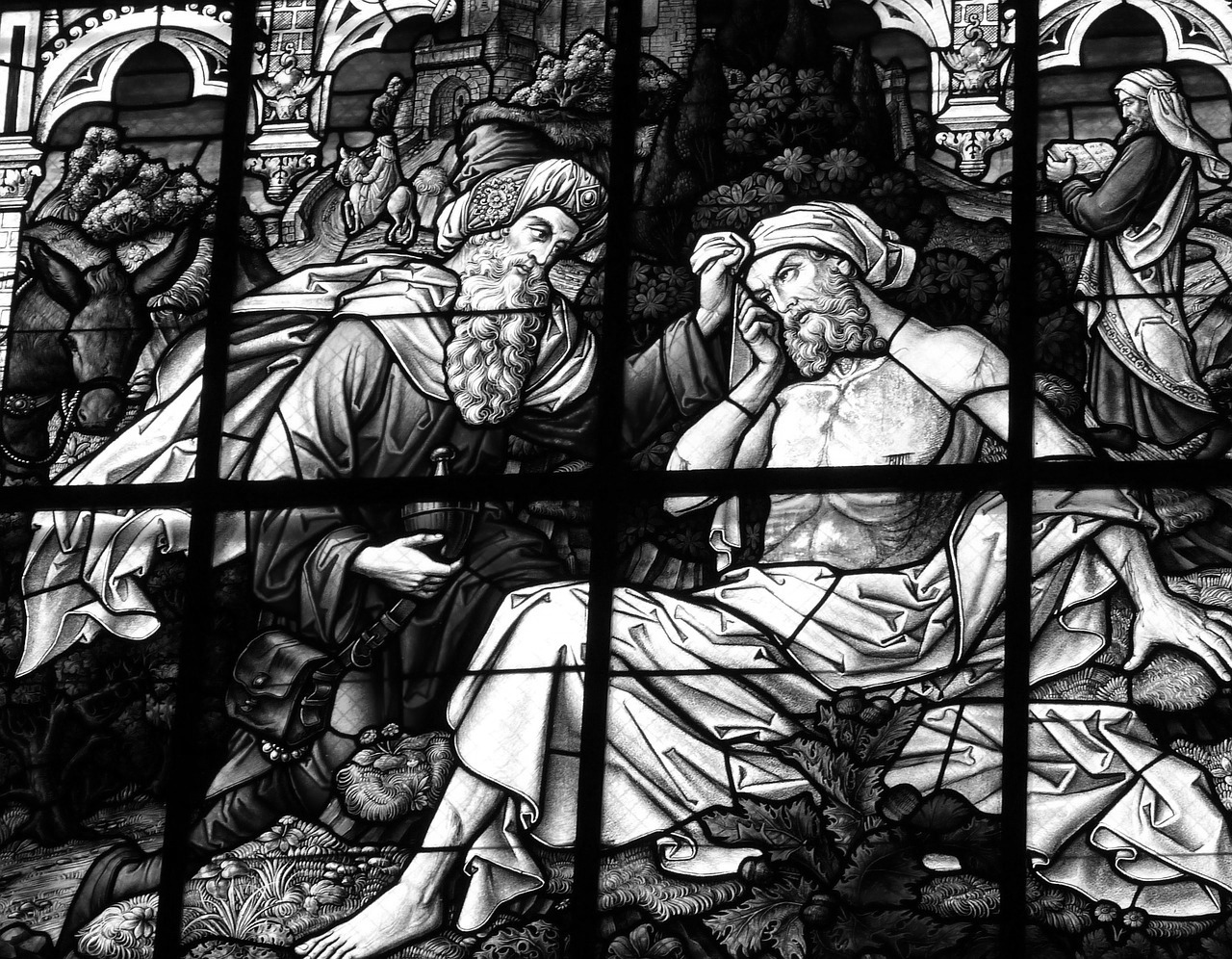 Last night I was reading the story of the Good Samaritan in Luke 10:30-37

Then Jesus answered and said: “A certain man went down from Jerusalem to Jericho, and fell among thieves, who stripped him of his clothing, wounded him, and departed, leaving him half dead. Now by chance a certain priest came down that road. And when he saw him, he passed by on the other side. Likewise a Levite, when he arrived at the place, came and looked, and passed by on the other side. But a certain Samaritan, as he journeyed, came where he was. And when he saw him, he had compassion. So he went to him and bandaged his wounds, pouring on oil and wine; and he set him on his own animal, brought him to an inn, and took care of him. On the next day, when he departed,he took out two denarii, gave them to the innkeeper, and said to him, ‘Take care of him; and whatever more you spend, when I come again, I will repay you.’So which of these three do you think was neighbor to him who fell among the thieves?”

And he said, “He who showed mercy on him.”

Then Jesus said to him, “Go and do likewise.”

I have read the story many times, but I felt clearly the question “Which would you be?”

The Priest was a Holy ordained man of God.  The descriptions of the characteristics of a priest, present this embodiment of Christ – Holy, kind, having spiritual leadership, with the ability to invoke heavenly influence.  Yet he passed by on the other side, not even taking time to see the true need of the man.

I figured, in today’s society the Priest would have at least said a prayer as he walked on by.  You know “How you doing brother?”  “Aw that sounds terrible.”  “I will pray for you.” As the  conversation ends and the Priest quickly turns to his own needs or moves on to more spiritual people who can build him up, not make him serve.  He might think about the prayer request as he goes to his prayer closet that day, but the moment of need has then passed, unmet by the one who could have invoked heavenly influence.

I admit, I have been the casual “I will say a prayer” and then forgot as I allowed other things to get in the way of me and the need that I was presented with.  Depending on the day, this might have been me.  Some days I really just want to stay in my own little world and not deal with the problems of others. I am better about the immediate prayer as I walk on by, but I admit this can be me.

Then there was the Levite, a servant in the temple that was looked to as a religious teacher.  The Levite knew the ins and the outs of the Law, and certainly held people to the religious standards that it imposed.  They were also supported by the tithes of the people.  He also passed by to the other side after taking a look also.

I figure in today’s society, this would be the one that would scope out the situation to see what might be gained from involvement – status, recognition, money.  A quick scan would quickly reveal that this was not someone who was in a position to share who had helped him survive, name dropping to those who mattered the special way the Levite had helped.  The man was left for dead, robbed of his worldly possessions, so money was out of the question.  After realizing he had nothing to gain, he would just walk on by in his own little world, not realizing what he did for the least of these would be counted by the only one whose scorecard really matters – God.

No God, I don’t think this one would be me.  I do not care what people have to offer me – money, influence, recognition or praise.  I do not look at how something can benefit me before I get involved.  I am not motivated by

money, recognition, or influence.  I am not a name dropper, and don’t really like the praise of man.

Then there was the Samaritan.  He had compassion.  He met the immediate need dressing the wounds and moving the victim from where he was.  He found the resources that the man would need, and offered to pay for the continued need of the stranger he just met.

I admit, if this happened today, I would align more with the Samaritan usually, I would have compassion. Not that I see myself as a good Samaritan, just my curiosity would not allow me to go to the other side.   I really like to help people. I would be there at his side trying to find the resources to help him – in his immediate and long-term needs.  I probably would not have the money for the care, I think that is why God taught me about research – because the money is there to meet needs if one is willing to do the work.   I would certainly help link him up with places that could meet the need and get him there.  The inconvenience would not bother me, I would be moved by the compassion to help.  I would even follow-up to see how he was doing if HIPAA would allow.

Ask yourself honestly, which character would you play in the story of the Good Samaritan?

I realized as I thought this through, this isn’t just a story of something that happened in the Bible.  It is not just a moral of “Love your Neighbor” and “Everyone is your neighbor.”  This is life today.  There are so many people with real tangible needs.  It is easy to get caught up with our own problems and not take the time to see the issues in our community like the priest.  Or get so wrapped up in the rat race that we don’t make a place to open ourselves up for those who we think have nothing to offer us like the Levite.

However, the deeper lesson of the Luke 10:30-37 is found in  I John 3:17  But whoever has this world’s goods, and sees his brother in need, and shuts up his heart from him, how does the love of God abide in him?

I think God wants us to have nice things, but when and estimated 2,429 people are homeless in your community, and 1 in 6 in your community have food shortage, and several towns in our community don’t have safe water to cook or drink with – pretty sure you can have nice things with a lesser price tag and help meet an immediate need.  One day we will stand before God and give account for our actions and inaction.    “God I didn’t see it” will be hard to say in a day of social media and cause marketing that we live in now.  “God, I was to busy…playing with the toys I bought with the money you lent me to further your kingdom and meet the needs of the hurting.”  Not sure that will fly either.

It is hard for people to see a loving God when they see people with the resources to help them up, and they just walk on by. Or worse take the time to condemn them without building a relationship to help them learn about the transforming power of the God Christian’s represent.  As Christine Caine says “You have to catch the fish before you try to clean it.”

‘Come, you blessed of My Father, inherit the kingdom prepared for you from the foundation of the world: for I was hungry and you gave Me food; I was thirsty and you gave Me drink; I was a stranger and you took Me in; I was naked and you clothed Me; I was sick and you visited Me; I was in prison and you came to Me.’ Matthew 25:34