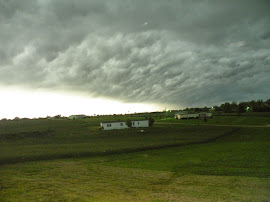 It has been a month today since the tragic tornado in Joplin that claimed the lives of over 150 people and destroyed thousands of homes and businesses, leaving a large path of destruction. I praise God that I was not in Joplin that day, but was instead at home celebrating my daughter’s high school graduation. I remember standing outside watching the storm that had just some time before ripped though Joplin, unbeknownst to me. It would be several hours before I would find out that the hospital I have worked for since April 2009 was destroyed.

I guess the stages of grief started immediately. I was in deep denial. I didn’t believe that it had happened, and certainly would not believe the magnitude of the destruction. My friends and family questioned if I needed to do anything and what they could do. My heart-felt helpless as I had no clue what to do. My mind knew that we have a disaster call list and that I would be called when and if they needed me. I got the call that night to come in the next day.

As I drove in, my route was detoured, so I had little knowledge of the extent of the damage and destruction. It was more of a personal inconvenience as traffic was insane, backed up and police directed as the stop lights were out. I had to get directions on my cellphone to a location that I had never been before, Memorial Hall.

I was protected from the devastation driving in to Joplin that day. Reading about tragedy, for me, is much different from seeing it or experiencing it first hand. And that first day, I had only read on the Internet reports and seen darkened news reports on television and heard things on the radio. I believe that was purposeful on God’s part. I might not have been able to handle the trauma that I would need to help people through if it was being filtered through my own secondary trauma and loss.

When I got there, everyone was being ushered in to emergency shelter as a tornado warning was in effect. I would visit those emergency shelters three more times over the next twenty-four hours. Honestly, I would moan and complain about having to be in the basement of some building. I want to be able to see what is going on outside. They were on high alert, I was still in my own little world.

I spent the next 24 hours helping people seeking medical treatment to make sure their physical, social, emotional, and psychological needs were also met. I could see the Spirit of Mercy was alive and well, despite our home being gone. We talked with every patient and family that came in to assess their needs. Shelter was the most common need, and transportation, both were readily available.

Many people wait months before the onset of processing things, others wait a lifetime and let things build up to the point they have no other choice but professional help. For many, that Tuesday morning would be worse than the tornado. My heart broke the following day as people who had spent the night treating others, came back realizing they too were injured. Their emotions were raw, their faith broken.

I remember walking the perimeter of our makeshift hospital around midnight praying to God to comfort those who had suffered loss. I prayed for Him to give strength and energy to those wanting to reach out and help. I prayed for God to help workers find those who were still alive, and to identify those who were not. I knew that praying was the one thing I could do as the patient’s stopped coming due to curfew.

My heart was blessed as I came back around to the main entrance of the building. People had been dropping off donations since I had arrived that morning. The whole entrance was full of clothing, shoes, hygiene products, water, food and other items people use on a daily basis. There were donations of medicine and other medical supplies that were needed. It truly was a work of God how quickly things had come together.

I left the following morning, and was unfortunately taken down through the hardest hit areas. I felt saddened as I saw the people rummaging through what was left of their homes. I was angered as I saw people who were, in my opinion, making light of personal tragedy as they drove snapping pictures of people’s private pain. My heart sank as I saw the outside devastation of the hospital from Main Street, especially knowing that despite its damage, it was the only thing really standing off in the distance and that from where I was I shouldn’t be able to see it.

Like I said, today it has been a month. At times, I still feel helpless. At other times selfish because I don’t want to see anymore.  Seeing pictures of the inside of my hospital tore my heart. I don’t like hearing the sirens, or anything like it. I can’t imagine how those who lived through it feel.

Helping remove rubble from a destroyed home, gave me some sense of purpose.  It was so minimal compared to the needs I see before me. Comforting families who lost loved ones, providing encouragement, donating time and goods, it all falls short of what is needed.  I know that it is going to take everyone doing something to meet the need. It is hard for me to go to Joplin, to work in a tent, that praise God meets the needs of the people, but is a constant reminder of what was lost.

Then I am reminded that it is through our hardest times, that God draws the nearest. It is in our weakness, He is made strong. I think about the lessons I have learned from this devastation, and hope to get them shared soon here on my blog.