Take up your Cross

Posted on January 14, 2009 by Jackie S
Matthew 16:24 Then Jesus said to His disciples, “If anyone desires to come after Me, let him deny himself, and take up his cross, and follow Me.”

I have always heard the verse but I have never fully understood it. Jesus died on the cross, He paid the price for my sins – why would I pick up a cross  I desire to know God and be a follower of Christ – but what His words meant was beyond me.

I have been doing a verse by verse study in the book of Matthew – my goal is to study the gospels and Acts. I am looking for what Christ told me to do (all Christians to do), what example He set. I have to say it has been pretty eye-opening as I allow the Holy Spirit to help me understand and grow in my walk with Christ. 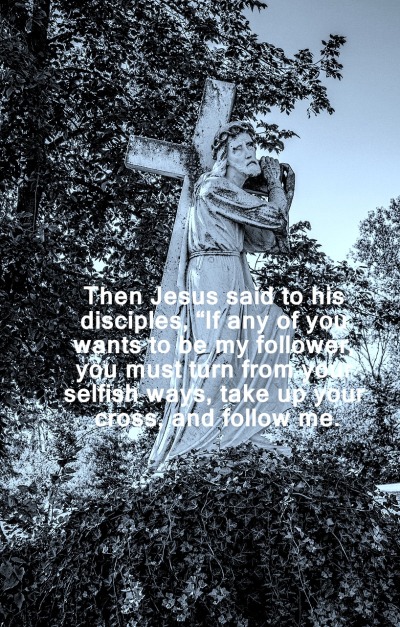 I read that verse again, but I read it in context. Jesus had just rebuked Peter for saying the prediction of Jesus’ death should not happen. Jesus said, “Get thee behind me Satan.” Jesus knew what lay ahead of Him, and as a man it was going to be a hard road to go. He certainly didn’t need his friends telling Him not to do it.
Jesus makes this incredible statement right after He rebukes Peter. “If you want to be My follower, deny yourself, pick up your cross, and follow Me.” As a Christian I want to follow Christ, but with His next statement, I believe Christ was telling us to deny what we want just as He had.

Christ certainly had to deny His flesh in order to take our sins upon Himself. Some men might die for their families, but not too many men who would die for their enemies, except maybe our military men and women. Christ’s friends were saying, “Don’t do it.” Christ knew what was coming but He chose to deny Himself. He knew what allowing Himself that pleasure would do to the world He came to save – He loved us too much.

So as Christ stood before His accusers, He denied Himself so that He could pay the penalty for all sin. Then He said, “Take up your cross.” Something that my pastor said made this truth click. Jesus was the High Priest but He was also the sacrificial Lamb. He not only offered the sacrifice as the High Priest – he was the sacrifice as the Lamb of God. When Christ took up the cross, He acted as both—Priest and sacrificial lamb.

We also have to be a sacrifice. He doesn’t want our body on a cross; Christ wants our life
fully sacrificed for His cause. He wants us to be willing to offer our life to Him, and our life is to be a sacrifice as we deny our self and follow the path He took. He then said, “And follow me.” He didn’t just say, “Oh I will die for them.” He acted on His words. He died.

So often we say, “Oh I will sacrifice …. for Christ” but when push comes to shove, it is Christ that gets set aside. We think the sacrifice costs too much. We won’t put action behind our words. Christ wants us to follow Him – He died – just as He wants us to die to self. He rose again, and He promised to give us a new life for the life we gave up. We die so we can live in Him. He died so we could live with Him. So deny yourself, take up your cross, and follow Him. Deny yourself, sacrifice yourself, and die to self and you will be able to live in Christ.

I have been through a lot in life, but through Christ I am more than an overcomer. I am not perfect, I will never claim to be. Praise God I am forgiven though. I am rather opinionated. I see most things in black and white and believe honesty is always the best policy. This combination sometimes comes off harsh. The truth is I love people. I truly love helping others and try to believe the best about others. It is easy to find faults, but focusing on strengths is more my style, but I also shoot it straight. If it sounds harsh, know my heart is for something better for you.
View all posts by Jackie S →
This entry was posted in Restoration. Bookmark the permalink.

1 Response to Take up your Cross