In Spite of Me

I have been doing a little review the past few weeks (okay months, it just sounds like a long time), as I try to figure out this thing called life. You know – where have I been, where am I going, a lot of soul-searching. I am big on writing, and have a lot of prayer journals, so I have been looking over those and the things God has done.

I came across a line that struck me at the core, because while I see a lot of changes, I read a line that is something God has been really working in me a lot on lately. It said “I don’t know which direction my life is going, it doesn’t seem to be following the plans I made.” That was back in 2004 – and all these years later He is still trying to get through the same message.

I realized back in October of this year, that sometimes, okay pretty often, God moves IN SPITE OF ME. I have this “perfect plan” all laid out, and think it is going to bring about the end result that I want. Well, most of the times the plan either doesn’t work out or the end result is different from what I planned.

It always works out – most things hardly ever stay the same – but it works out in God’s plan, not mine. Lucky for me, every now and then, my plan lines up with His even though I often forget to ask. 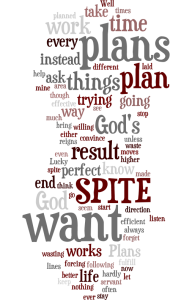 It is a sobering idea how dependent we are on God, but when we will depend on Him, then it will all work out. I think back to all the requests, and how God moved in each situation I prayed for. When I look at specific requests, sometimes He moved like I asked, but other times, He moved in such a way that I would have never thought to ask and things turned out better. And other times, I would just say “Your will be done.” and those things were resolved quickly and with the best possible outcome.

I am saddened to think that even though I was asking (superficially), for God to change me, that I still clung to my own plans all this time. When it finally hit me, back in October, I still have been slow to take those steps of faith, and follow the plans I know are before me.

I know that I want God to take the reins, in every area of my life, I want to let go of my plans and start to see the plans He has, in spite of me, that I can help fulfill. I don’t want to keep wasting time trying to do things my way, when God’s plans are so much higher, efficient, effective, and perfect. I don’t want to waste any more time forcing God to do things IN SPITE OF ME instead of through me as a willing servant of His will!

I have been through a lot in life, but through Christ I am more than an overcomer. I am not perfect, I will never claim to be. Praise God I am forgiven though. I am rather opinionated. I see most things in black and white and believe honesty is always the best policy. This combination sometimes comes off harsh. The truth is I love people. I truly love helping others and try the believe the best about others. It is easy to find faults, but focusing on strengths is more my style, but I also shoot it straight. If it sounds harsh, know my heart is for something better for you
View all posts by Jackie S →
This entry was posted in Restoration. Bookmark the permalink.